Despite never having heard of him before, Solomon James has proven himself one of the most talented young and new composers of the year so far, from the intricate cinematic arrangements to the profound storytelling of what sounds like a soundtrack album, “Yumbo Mike” elevating his artistry to a breathtaking level of sonic and lyrical sophistication. The album is based on a legend of a man, named Yumbo Mike, who came to the United States in search of freedom and adventure. Solomon claims to have met Yumbo Mike who helped him escape his boring office life in exchange for one of danger and adventure.

The opening track, “Where the Wind Will Take Us”, featuring Gareth Heesom chronicles this story. Bathed in resonant and dominant piano chords, as well as gentle sways of chamber-like orchestration the music evolves and expands into an exquisitely colored backdrop on which the engaging and rich vocals narrate the story.

In fact, each song is like its own mini-movie, in the way that it unpacks both its verbal and musical narrative. “Djembe Mike” starts with the spectacularly beautiful voice of Jessica Lee. Her airy and ethereal vocals flow effortlessly above Solomon James’ rolling piano lines, which unfold into momentum-pushing percussion and lush waves of strings. 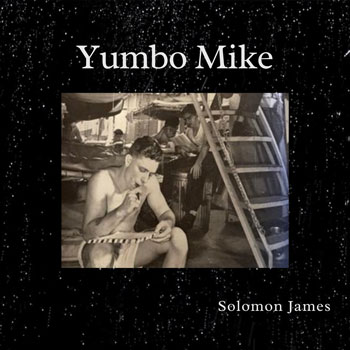 This is both a musical and lyrical evocation of sonic bliss, as it builds towards a crescendo, and a sudden, unexpected halt. Solomon James manages to convey this almost too-precious aural paradise with a beautifully eloquent arrangement.

There are not too many that sing with as much tenderness, seriousness, and emotional specificity, and in such an understated way, as Tanny Blue does on the third track, “Yumbo Mike Goes To America”.

Atop a bed of gorgeous piano keys that perfectly mirror the story’s aesthetic, the songstress gently unpacks her verses, while Solomon James expands the sonic template with mellow, but effervescent orchestral flourishes. Solomon’s music has an emotional weight far beyond what you contemplate on the first listen.

The album closes with “The Great Wall”, which also features the captivating vocals of Tanny Blue. This track resounds with the juxtaposition of Tanny’s vocals, the big percussive interludes, and the extremely addictive melodic piano motif.

Of all the songs on “Yumbo Mike, this is the one that rises above, by finding a larger variety of expressions in it runtime. It is awash with rich musical imagery, at times restrained, and at others more euphuistic.

As stunningly beautiful as the songs are on “Yumbo Mike”, it is Solomon James’ composition and production techniques, which really takes the music to higher elevations. It’s the subtleness in the production that really brings forth the creativity and originality that one may come to expect from a project such as this.

Aside from the production, the actual music on “Yumbo Mike” seems to carry a theatrical quality, thus the album flows like a movie, drawing you into Solomon James’ elegant brand of sounds.

MadnessMen are 2 Italian guys who first start making music for games and phone apps. After

When considering a multi-disciplinary artist like Franco Esteve, the force of his influences can often escape newer