The dense, bombastic wall of sound that has settled over the indie landscape lately, burying everything under its raucous and strident sheen, has made appreciating new music less about locating new sounds than pulling them out of the noisy miasma. This spate of highly banging production, all twisted synthesizer fuzz and sweetly auto-tuned harmonics, can make for difficult to tell the wheat from the chaff. speakeazie makes it easy on the single, ‘I’m Crushed in His Gaze’, lifted off her upcoming EP release ‘Bootlegger Blood’.

It supplies an intense but transparent sheen of iridescent sound, marking a track that’s quality is almost instantly evident. Better than anything in recent memory, in the alternative bedroom and dreampop scenario. The single typifies the use of music as a tool to convey inner emotion, shift a mindset, and push a tangible vibe through the speakers.

Based out of Minneapolis, MN, speakeazie sounds both nostalgic and futuristic on ‘I’m Crushed in His Gaze‘. The song is wrapped in a hazy, laidback, yet impactful and immersive world, where emotions are high and passions are inflamed.

The lyrics are beautiful and dangerous, afflicting and hopeful, all at once. “I’m getting sick of the churning, turning left in my head. But I know he’s in pain, freaking out in his dread. And now I’m healing and sealing all of his scabs. It’s a beautiful feeling till he thinks back and snaps,” declares speakeazie.

Filled with lyrical paradox, the metaphors for a beautiful and costly relationship collides through each verse. The song hosts a melodic and humming retro sheen of cinematic strings and horns alongside the subtle throbbing pulse of the drums.

The singer’s hushed delivery sounds magnetically taut and magically enchanting. Each time you play ‘I’m Crushed in His Gaze’, speakeazie’s voice reaches deeper and further into your soul, while the music surges and pulses more. It’s remarkable how dynamic this song begins to sound after multiple listens. 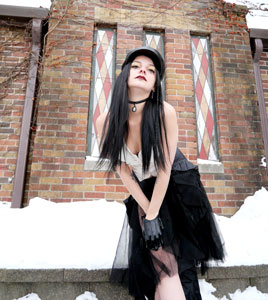 ‘I’m Crushed in His Gaze’ is a masterful puzzle, diverse swaths of tone and texture that are so that dense they become minimal. Together with speakeazie’s vocals they engage in a smartly constructed sweep, until the instruments and voice intertwine with each other so effectively that nothing else around you exists.

“Churning and turning, I feel it all in my head. Burning and yearning, he’ll love me till I’m in shreds. And I cannot face all his wars. But I’m willing to stay cause we’re deeper and sworn,” exclaims speakeazie, her tone being both desperate and devoted.

‘I’m Crushed in His Gaze’ is a touchstone for deep and dark melancholic pondering on the extreme contrasts of love, and how far it’s consequences and tragedies will take us next.

This is a record that demands to be turned up, as it creates a sound that is much bigger than is initially apparent, and is helped by the fact that speakeazie can carry a song on her own with her nuanced and wistful voice. Slow-paced and hypnotic, ‘I’m Crushed in His Gaze’ delivers a darkly tinged and evocative mind-altering discourse by speakeazie that is hard to resist.

Haunting, ethereal, and immersive. These are words that could embody the spectrum of descriptors, when contemplating

The sum of every guitar flutter, bassline throb and drum beat that brings electric85 to the

Born Helio Sixpence in Malawi in 1983, Rootspence discovered his talent for
Baggalott’s single “Pit Stop” feels like an explicit, straight-talking lullaby. Scaling up
Caleb Richardson, professionally known as 24k Melodies, is an aspiring artist from
The world has come to know and love the hard-working emerging artists
You don’t have to be a fan of emo and post-hardcore to
This website uses cookies to improve your experience. We'll assume you're ok with this, but you can opt-out if you wish.Accept Reject Read More
Privacy & Cookies Policy