Scott Kalama aka Blue Flamez is first and fore mostly, a proud tribal member of the Confederated Tribes of Warm Springs, and then a skillful award-winning rapper. That means he is original. That means he is authentic. That means his purpose in life is to instill people with the truth to inspire them into meaningful action. All of this becomes even more important when it concerns the existence and prosperity of Native Americans. Blue Flamez has always taken pride in exposing his life as an indigenous person, and living on a reservation. His single “Warrior”, taken from the album of the same name, is dedicated to raising awareness about chronic Warm Springs water supply issues.

Currently Blue Flamez is on a prolific run in his career, as he continues to turn out conscious and quality music. To be a part of his success and ambitions, you can head over to 2020-2021 Native American Music Awards and vote for “Warrior” by Blue Flamez ft. Tanaya Winder. Anyone who thinks rap is becoming about less and less these days should give this song a listen. The result is the exact opposite of what you have been hearing on the radio lately.

“Warrior” by Blue Flamez ft. Tanaya Winder, uses its title in the most positive and noble form. It embodies his fearless style and is a testament to the principles, which code Blue Flamez music, mind and life.  “Ask me what it means to be a warrior,” sings Tanaya Winder. “I liken it to being a kind of soldier of love, healing, of seeking to empower. Find your voice, use your gifts, activate your power,” she continues. Her is voice clear, defined and determined in bringing a message of empowerment. 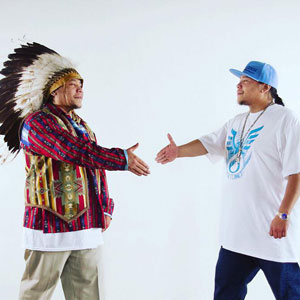 “We need to listen to the woman’s mission. Get rid of vicious conditions. Stop being the victims of the system,” replies Blue Flamez, further down in the song. His voice bold, resonant, and comforting, as he spits both words of wisdom and appreciation for the female species of our planet. “Protect the women and children. That’s our religion. No need for recognition. Stay true with the women’s leadership position,” he concludes.  Blue Flamez understand that the power of music has so much potential, hence passivity is not admissible. We need to be purposeful and proactive.

Blue Flamez has loads of respect for his cultural roots – throughout his discography, you’ll notice that his music borrows much influence from his ancestry. Blue Flamez understands that the power of music has so much potential, that passivity is not admissible. Therefore, his songs are always purposeful and proactive.

There’s no fluff attached to the EP “Good at Feelin’ Bad” instead, what you get is

Sean Blak is originally from ATL and moved to the Bay area during the Hyphy Movement,

Producer, audio engineer, and rapper Ravine Reedy aka Akuu, has been making music for about 10

There comes a time in every music lover’s life when an artist
Call this pop, rock, Americana, singer-songwriter, or whatever you like, it still
There’s no fluff attached to the EP “Good at Feelin’ Bad” instead,
It really is quite special to see an accomplished musician developing in
Sean Blak is originally from ATL and moved to the Bay area
This website uses cookies to improve your experience. We'll assume you're ok with this, but you can opt-out if you wish.Accept Reject Read More
Privacy & Cookies Policy