All of the well-worn Sanningen hallmarks are present on their single “Hjälp!” but what is truly impressive is how effortless it all sounds this time around. The jangling guitars, the ever-building and immersive atmosphere, the tasteful kinetic drumming, and the smooth basslines, together with the smartly plucked lead motifs, which gets locked inside your head, make for an energized yet relaxed indie rock groove with a subtle pop twist, which form a rich organic foundation for the mellifluous vocals. No matter how much the Stockholm, Sweden-based band ignite the song’s momentum and intensity, they never lose that impressive cool aura of a confident musical collective on a mission.

The mission of “Hjälp!” is describing the difficult life events of some of their fans and followers, and even though the song is in Swedish, the tone, timbre and mood of both the instrumentation and the vocals is enough to convince listeners of Sanningen’s authentic and honest intentions. Taking their cues from 80’s influences, the band pride themselves writing about real experiences and events. This is reflected in the band’s name, as “Sanningen” in English, means “the truth”. 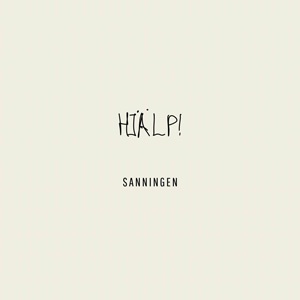 Musically, “Hjälp!” is full of universally lovely melodies and earworm choruses. Over a steadily bouncing rhythm, it’s naggingly addictive instrumentation, gently push the vocals to deliver the passionate lyrics that channel the band’s messages. The recording becomes a kind of present-day creative philosophy for the band, framing their open-minded, thoughtful and insightful outlook on the more noble purposes of making music besides the technical expressiveness of the art form.

Sanningen’s artful musical touch and wizened lyrical approach, makes the almost three meaningful minutes of “Hjälp!” infinitely more durable than its brief runtime. The tune will stick inside your head long after the last notes have been played. Almost everything about “Hjälp!” plays to the band’s strengths. They sound as tightly knit as ever, and this bond manifests itself throughout the song – during the breaks, build-ups and majestic instrumental flourishes which never overwhelm.

The layered guitars are certainly an imperative part of Sanningen’s sound. It gives the music it’s dynamic and tonal depth. It goes from an infectious plucked motif, to jangling strums shimmering, and an altogether sweeping wall of transcendental sound. The rhythm section is never far behind, never losing momentum and adding exiting rhythmic flourishes to keep the listener locked into the evolution of “Hjälp!”. The lead vocals have a pristine and translucent quality, which carries the melody with effortless ease.

The new record “Hjälp!” pulls together all of  Sanningen’s disparate innate talents and learned skills into a properly coherent continuum, and the band are open-minded in the ways they thread it all together, presenting a songs that is both sophisticated and bold, heady but not heavy, fresh but thrillingly nostalgic.

With “Hjälp!” Sanningen highlight once again how the approach of making music with real meaning is equally as stimulating for the creator as it is for the listener. It effectively reveals the record’s most brilliant and affecting shades. “Hjälp!” is universal sounding indie-rock, where Sanningen reconcile all their intrinsic qualities, and unlock their full potential to the world.

Believe In Yourself is that lively, lighthearted, inspiring and uplifting track that’s a bit of a

On their album, “Blisters”, The Bawl Slant shows a great balance moving between heavy sludgy riffs

Experimental trap music is a sub-genre of trap music that incorporates experimental
Drawing inspiration from Mayday Parade, The Summer Set, The Early November, and
Wes Dean’s “Want You Bad” is your not-so-classic love song with a
One of the reasons hip-hop is one of the most exciting and
ICEEWRLDD is a male hip-hop artist hailing from Atlanta, Georgia, USA. He
This website uses cookies to improve your experience. We'll assume you're ok with this, but you can opt-out if you wish.Accept Reject Read More
Privacy & Cookies Policy